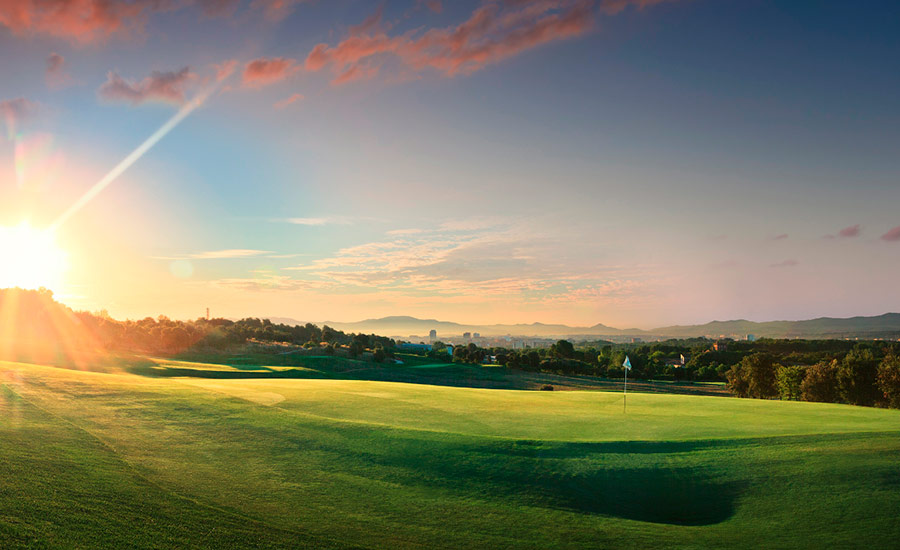 The most exclusive golf in Barcelona, with 45 ‘Greg Norman’ holes within a natural park

Admired by professional and amateurs players, the centenary Real Club de Golf de El Prat is the most awarded golf club in Europe, having organized more tan 250 competitive events at national and international level throughout its history, including the Spanish Open ten times.

Its origins date back to 1912, when the Barcelona Golf Club was founded, a pioneer of golf in Catalonia, which later came to be called the Club de Golf de Pedralbes, with a 9 hole short course in the higher area of Barcelona, in the foothills of the Collserola range. It was in 1954 when, due to the expansion of the University of Barcelona, the club moved next to the beach of El Prat de Llobregat, with a splendid course designed by Javier Arana, that would be inaugurated two years later with the Spanish Open of 1956, which was won by Peter Allis. Victorious names emerged from here, such as Severiano Ballesteros, Tom Watson, José María Olazábal or Sergio García – as an amateur. Later on, in 1999, he debuted here as a professional.

The expansion of Barcelona airport forced the club to move in 2003 to its current location, the Mas Bonvilar estate, between Terrassa and Sabadell, with which it grew further, achieving today’s excellence. The Real Club de Golf El Prat currently occupies a space of 220 hectares in the area of Parc Natural de Sant Llorenç de Munt i l’Obac, with mountains which captivate the gaze of the golfers.

It’s 45 holes – with two 18 hole courses and another of 9 holes (El Vallés, par 36), that combine with each other – were designed by the Australian champion Greg Norman. The modern, spacious and dynamic clubhouse in the heart of the course was designed by the award-winning Barcelona architect Carlos Ferrater. Here the restaurant always surprises you with its elegant and appealing culinary offerings, with fresh seasonal products of the highest quality.

In this new era, the Real Club de Golf El Prat, 31km from the centre of Barcelona, breathes a renewed spirit, maintaining its familiar character, faithful to its social members, but with arms open to golf tourism, welcoming more than 9,000 international visitors per year.

A fusion of comfort, challenge and beauty

Norman’s approach fuses comfort with beauty, adapting the course to each level and style of play and harmoniously integrating the layout with nature itself. The complex offers three coloured configurations with Pink, par 72 of 6,492 metres; Yellow, par 72 of 6,673 metres; and Green, par 72 of 6,210 metres, designed to enjoy golf at the highest level. They all shine with aesthetically beautiful holes, especially with the contrast of the intense green of the grass with the white sand of the large bunkers.

The resort combines areas of well-preserved Mediterranean forest, with pines, holm oaks, oaks and bushes, reaffirming a varied, demanding and fun layout, and a splendid setting for the challenges presented to the player. There are numerous, deep bunkers that flank the fairways and surround the flags, and where raised greens predominate with moving and fast surfaces.

From the original design by Greg Norman, the integration of the landscape and the respect for the environment are part of the philosophy of Barcelona’s famous golf club, which has favoured the increase of the fauna and the care of the vegetation that grows on the course. This has made it worthy of the ISO 14001, in recognition of its commitment to sustainability, an aspect in which work is continuous so that the course is ever more friendly, fun and sustainable.

The practice area has a driving range more than 300 metres long with a capacity for 50 players. This is completed with an approach area with bunkers, two large putting greens and three short training holes. These are magnificent training facilities, much frequented by Tour professionals like Pablo Larrazábal, Carlos Pigem, Eduardo de la Riva, Mireia Prat or Adri Arnaus.

In addition, the services and activities are superb, with salons for events and meetings, a wellness centre, swimming pools, bikes, padel courts, a kid’s club, relaxation areas and locker rooms, a card-playing room, a snack bar, a pro-shop and a rental service.

As a prestigious club, recently named one of the Best 125 Platinum Clubs in the world, it has carefully chosen recommended accommodation establishments for its players, the closest being Hotel La Mola, joining the Attica 21 Vallés, Hotel Sant Cugat y Gran Hotel La Florida. As an ideal destination for sports, resting and business, it suggests that its visitors enjoy the best football, cultural and gastronomic experiences offered by the exciting city of Barcelona.